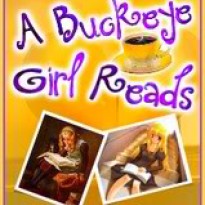 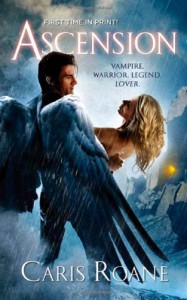 I owe author Gini Koch a big thank you for introducing me to Caris Roane! This is the best paranormal romance I've read in a really long time. The world building was unique, there were strong alpha males, hot, hot, love scenes, a strong interdependent heroine and wonderful swoon-worthy secondary characters. I can see why this series is compared to The Black Dagger Brotherhood series by J.R. Ward, but honestly? The similarities seem almost identical: this is about a group of vampires protecting the earth and report to a women, as do the BDB brothers, but honestly? The world building is completely different. It's more complex, the characters have more depth and the writing isn't as, dare I say it-cheesy- as it sometimes is in that other series. (I love BDB, but really some of the dialogue is questionable.)

Normally complicated world building drives me batty, but after reading so many paranormal romances with very little world building being done, it was nice to see a completely new world set on top of our own. Alison has always been different. She has abilities that normal humans don't have. She can stop time and move objects with her mind. She can also read minds. The one time she had sex the guy died, and it scared her so much that she never attempted to find out why her powers were so powerful that he died or got close enough to someone else to hurt them. She's a bit jealous of her older sister Joy who is married and has a child, and is expecting another one. She wants a relationship, but is scared to have one.

Alison is a therapist (though I'm not sure how because she doesn't have a PHd and I thought you needed one to practice)and after seeing her last patient before going back to school to get another Masters degree, she is leaving work and is stopped because someone has been killed. We are then introduced to Kerrick, who is on the scene to cover traces of the killing that has just happened. It was done by a death vampire from second earth. (Second earth is just like Mortal Earth, only on a different dimension.) Kerrick is also there to make sure the Death Vampire doesn't kill anyone else. He's not prepared for Alison. He's shocked that she can see the Death Vampire and even more shocked to discover that she can do something called folding. (move from one space to another in a blink of an eye) Alison isn't prepared for Kerrick or the death vampire. The two are drawn together when it's discover she's about to go through something called Ascension and he's assigned to protect her.


I know this sounds insanely complicated, but it's not. The chemistry between Kerrick and Alison is sizzling hot. The two are soul mates, and fight it, but while it sounds a bit cliched, it wasn't and totally worked. I loved how the tension was drawn out between them. Alison was such a kick ass heroine. I thought she adjusted really well to discovering a whole new world, but at the same time freaked out like anyone else would. I also loved that she was normal. She wasn't running from a horrible past or a victim of a tragedy. She was strong willed, yet at the same time knew she needed Kerrick and would do anything for him, though it scared her to death to do it. Kerrick and Alison are one of my favorite pnr couples!!

The other guardian warrior vampires are slowly introduced, and the pov switches between them, Endelle (Whom I loved because she was so bitchy) and the villains. Normally I hate multiple pov changes, but you know what? It all came together nicely and made me want to get to know the other vampires fighting alongside Kerrick, and thought future story lines were introduced wonderfully without letting the romance being told get lost.

I am so glad I discovered this series a bit late, so I can devour the rest of the series. I liked this so much, I'm bringing back my meter system for it.